We have detected that you are using Internet Explorer – an outdated browser which is no longer fully supported on this site. In 2020, the Internet Archive will remove Internet Explorer from its supported list of browsers, following advice from Microsoft Chief of Security, Chris Jackson.

Using an outdated browser such as Internet Explorer increases security risks and restricts functionality. As a result, modern websites such as this one may not work as they should. To access this site in full, please upgrade to an alternative, fully-supported browser

That was the reason the federal Defense Logistics Agency (DLA) chose the waterproof Enduris Roof Coating system for its Scotia facility in 1996. “Most building owners in this area spend thousands, sometimes hundreds of thousands, each year keeping their roofs intact,” says Dave Landry, director of operations for DLA, adding, “After using the Enduris Roof Coating system, we spend almost nothing in comparison.”

More than two decades later, the coating’s 15-year extended warranty had long run out and DLA was ready to reapply. As in 1996, the alternative to resealing would have been a costly and intrusive tear-off. “We had a terrific first experience with Enduris Roof Coating. Twenty-two years later, there was no question about who we’d use,” said Landry.

The GE Silicones team inspected the roof for damage before the work began. After more than two decades of punishing conditions, on average, less than five mils of the original 21.5 mils coating surface had worn away. The seamless quality of the Enduris Roof Coating system protected the room from expansion and contraction cycles caused by temperature fluctuations, which can tear apart dissimilar materials where they overlap.

In the end, only 5% of the 275,000 square foot roof required repair—the rest just needed a few more mils of coating. DLA chose to cover the previous gray coating with white Enduris Roof Coating finished with granules, helping to lower the amount of heat absorbed by the roof and add further protection.

The applicator, PUFF Inc., also experienced the benefits of Enduris Roof Coating. “During the seven-week project, we lost only one day to rain,” says Bill Rush, PUFF Inc. Operations Manager and an approved GE Silicones applicator.

“If it had been an acrylic coating, we would have likely lost a week to predicted rain delay. Additionally, there were two days that rain came unexpectedly from over the mountains, when the forecast was 10% chance of rain. We’d have lost 30,000 square feet of acrylic product each of those two days.”

A quicker install meant savings for the PUFF Inc. team—hotel rooms, per-diem expenses, and the opportunity cost of missing other jobs add up fast. Rush also felt a personal connection to the DLA positive experience. “I led the installation 20 years ago. It’s a matter of great pride to see how well the system held up,” he said.

Note: Performance results are those of reported accounts, and are not to be relied upon as typical or expected under any other circumstances. Performance results will vary depending upon a number of factors. Prospective customers should rely solely upon their own evaluative techniques to determine what results are attainable and optimal to their specific needs.

Has Your Roof Seen Better Days?

From minor leaks to full roof restoration, our 100% silicone solutions can effectively repair and provide long term protection for your roof.

Find out how GE Enduris™ Roof Coatings can protect, restore, and save your roof. 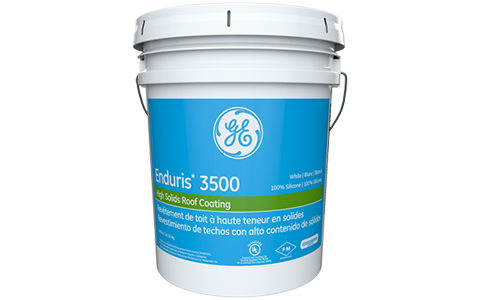 See all our posts
Blog

Get expert advice from one of our silicone for building specialists, or speak with your local sales representative today.